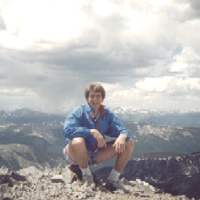 I am a 36-year-old male. Married, father of two a five year old and a 1-year-old. I am a non-smoker. I do not consume alcoholic beverages (at the most 1 beer a month). Up until recently, I was very athletic. I had been in numerous bike and running marathons, and participated in volleyball and basketball leagues.

When in high school and college I was a lifeguard in Daytona Beach, Florida. This was in the late 70s and early 80s when not much emphasis was placed on sunscreen.

I was diagnosed with malignant melanoma, Clark Level IV. The lesion was on my left shoulder measuring Breslow's thickness 2.4mm.

The lesion was excised wide area excision with flap. Dr. Jennings in Denver was the surgeon.

Immunotherapy injections decreased to every 3 months.

Lesion detected on lingular left lobe of lung, measuring 8mm on CT scan. At this time the brain was MRI'd with no lesions detected.

Back to John Wayne Cancer Institute for monthly immunotherapy injections. Reported to Dr. Foshag of the headache and confusion of thoughts and difficulty reading. Dr. Foshag requested I receive an MRI of brain on my return to CO.

Dr. Merrill (oncologist) in Ft. Collins informed me of a 4 cm. Tumor on my left brain with 3 small tumors scattered deep within the brain.

Dr. Kindt of the University of Colorado at Denver removed 4 cm. Tumor (the melanoma had ruptured causing the tumor to be 4 cm).

Dr. Breeze of the University of Colorado at Denver performed the Gamma Knife stereo tactic procedure on the three smaller tumors. Fourth tumor noted, but outside the range of helmet. Decided to re-scan in six weeks and take care of any new ones then as well.

Dr. Breeze of the University of Colorado at Denver performed the Gamma Knife stereo tactic procedure on the fourth tumor from above and two new tumors.

Brain MRI at University of Denver showed two new tumors on right side of brain.

Chest and abdomen CT at St. John Hospital in Santa Monica, CA showed slight growth (from 2.4cm to 3.0cm) in tumor on adrenal gland, and suspicious spot on liver confirmed as tumor. Still no change in lung lesions.

Gamma knife on the two new tumors. Also, six more small brain lesions were seen. Five of them were treated with the gamma knife - the sixth one was outside the helmet's position.

Had MRI of brain - no significant changes.

Started a three week treatment of a monoclonal antibody in Philadelphia, administered by Dr. Luther Brady and Dr. Curtis Miyamoto. Finished treatment on May 13, 1998.

CT of chest, abdomen and pelvis showed growth in the adrenal gland to 6.0cm. Several small, suspicious nodules appeared in the kidneys along with a larger spot on the pancreas. Also, there were suspicious looking lymph nodes in the lungs.

Started whole brain radiation. Started at a lower dose (200 rads per treatment), and finished on June 26, 1998. On June 14, started treatment doses of 300 rads after vision symptoms worsened (blind spot became larger - to the point of affecting my reading). Total rads after completing full treatment was approximately 3,000.

Entered Halifax Hospital in Daytona Beach, FL after the largest of the two occipital tumors, hemorrhaged. Remained in hospital for 9 days while brain was being monitored with regular CT scans and MRI. These showed stable progression. On July 3 released from hospital. Have since been making steady improvement. Vision has improved but not yet normal.

Started thalidomide treatment at New York Medical Center with Dr. Gruber. This involves taking 200mg of the drug once a day in the evening.

Scans of abdomen and a MRI of brain each showed they were stable, so it was decided to stay with the thalidomide treatment. This was Bill's last entry before he passed on November 18, 1998.